Blogging on Platforms and on MyHub.ai: 3 options 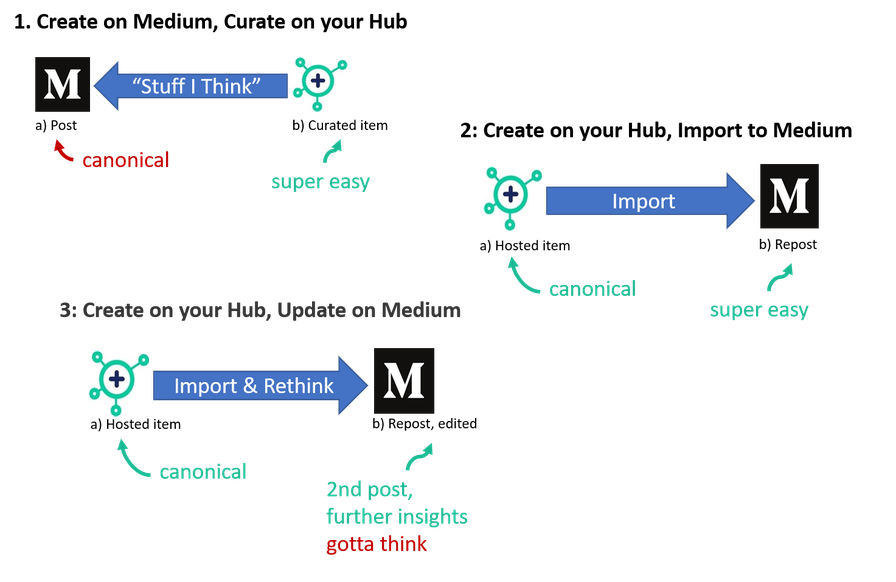 This post was prompted by an interesting thread on the merits and perils of blogging on Medium, but it holds for anyone with a Hub and an account on Medium, Linkedin or any other blogging platform.

I wrote it originally on my Hub, and will import it to Medium and give it an update in a few weeks. Why? Well, according to the thread, Medium is:

"another walled garden like Facebook. Own your words or they can take them from you"
- Scott Hanselman

I'm no copyright expert, but Medium's Terms of Service state: "You own the rights to the content you create and post on Medium. By posting content to Medium, you give us a nonexclusive license...", which sounds reasonable. On the other hand, "We can remove any content you post for any reason."

The bottom line is the same, whenever you post on any platform:

"whenever you adopt a social media platform, you make a bargain. Sure, you get a shot at their audience. But you have to use their technology, their way. While the results are often prettier, they decide how you will publish, and who will see it, on the basis of their commercial strategy, not on the basis of what you want to say, or how you want to say it."
- Where to find me, October 2013

Medium is a case in point. Some companies spent serious budgets backing Medium's native advertising strategy, only to see Medium pivot away to today's subscription model. Sucks to be them!

Today, if you put your content behind Medium's firewall you'll have a better chance of getting reach than on your self-hosted blog, and may make some money. If you don't put it behind their firewall, then all you get is a nice editor, free hosting and distribution to the Medium members who follow you. Either way, you're at their mercy.

The thread includes a long discussion on whether Medium is good or evil, and when/if it is better to set up your own server, host your blog on GitHub, etc. etc. etc.

TL:DR; it depends on you.

Three ways to get the best of both

If you have both a Hub and a Medium/LinkedIn/whatever account, you have three good options.

All provide the reach of the blogging platform (Medium, LinkedIn or whatever), while ensuring that your Post ("Stuff you Think") appears alongside relevant Stuff you Like and Do on your Hub, organised by tags and faceted search to make it easy to find.

But which is best for you?

Option 1: Create on Medium, Curate on your Hub

Publish your post on the platform, and then curate it onto your Hub as "Stuff I Think" (or "Do", as appropriate) so that your post appears alongside everything else on your Hub, organised by tag.

Downside: they "own your words" - the 'canonical' version of your content is on the platform; you don't even have a backup.

Option 2: Create on your Hub, Import to Medium

Write it as a Hosted Item on your Hub, then use Medium's import feature to repost on your Medium blog (or repost it manually on LinkedIn or another platform).

Upside: simple; your Hub is the 'canonical' version of your content.

Downside: almost none - you'll spend 1-2 minutes editing the imported story on Medium, a little longer to copy/paste it into LinkedIn.

Option 3: Create on your Hub, Update on Medium

Like Option 2, but don't import to Medium immediately - instead:

Let your post simmer in the deeper recesses of your mind as you give your brain a break ... Sooner or later, you'll have a new, original thought on the same topic ... Now is the time to break out your twin friends CTRL-C & V... to ReThink your old post: update it; argue with yourself; quote another source; explore a different angle; expand it; tighten it...
- Before you Repost it, ReThink It, February 2016

Upside: you're thinking evolves further and gives you two posts, not one post in two places; your Hub remains the 'canonical' version of your content.

As I said at the outset, I'll probably go with Option 3 for this post - i.e., publishing and sharing in late July on my Hub as a hosted item, with any feedback hopefully giving me some ideas for an updated version on Medium sometime in August or September.