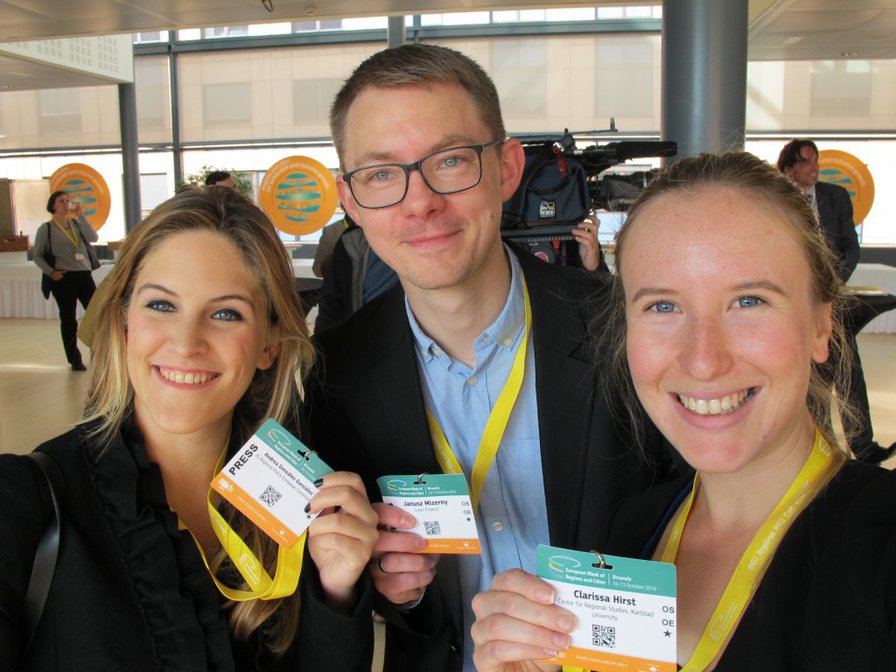 I finally vlogged my first event. Some first impressions.

I'm no gadget freak, but when Damien van Achter showed me the DJI Osmo (right) at the Brussels Hacks/Hackers Event last June I had to have one. It's an odd-looking piece of kit: a 4K, zoomless videocamera atop a handle, with a dedicated sideclamp for your smartphone, which acts as the viewscreen and (optionally) remote controller.

Crucially, the camera is mounted on a 3D gimbal, which radically reduces judder and provides incredibly smooth panning. The result is broadcast-quality video from a tiny handheld, rather than a massive shoulder-mounted pro camera.

Vlogging events "from the floor"

While the Osmo doesn't compete with a professional camera crew, it does make vlogging a conference or exhibition far easier: And that means you don't intimidate your interviewees, who often look (and talk) like this when faced with journalist and camera crew:

With the DJI, by contrast, you can stroll around an event unobtrusively, walk up to someone and start talking. They soon forget you're holding a camera at all. So do you.

The end result will not be as slick as a professionally created video, which is precisely the point.

The end result will never be as slick as a professionally created video, which is precisely the point. Gathering authentic impressions from attendees and speakers captures an event "from the floor", rather than via the video equivalent of corporate brochureware. And authenticity creates trust. But it's not perfect, either.

I first gave the Osmo a spin on Place Luxemborug on Brexit night, and quickly discovered that I needed better audio kit than the built in mike.

Last week I took the Osmo (this time with DJI's own tiny external mike) to the EU Week of Regions and Cities conference (EUWRC), for which I had organised the #EUinmyRegion blogging competition. The three winning bloggers were there, and were happy with me using them as guinea pigs.

I simply thumbed the on-switch and joined in

Hence when Andrea, one of the winners (right), started chatting with the manager of a project exhibiting at the event, I simply thumbed the on-switch and joined in:

The quality's not great, but remember: this was a test-run, without lights, audio setup or any preparation by anyone, including me. And if you need better audio, there are many YouTube tutorials on how.

Livestream: ask your audience's questions for them

Most of my videos from the event were live within a few minutes, but one thing I couldn't do was Livestream via Facebook, as DJI's Android app doesn't allow it. However iPhone users can, with their Facebook followers' comments appearing in real-time on their phone. This allows you, as an interviewer, to pose your followers' questions on their behalf, further opening up the event to external audiences.

Not everyone can attend your conference

Because that's the basic idea here. Not everyone can attend your conference, and liveTweeting doesn't get the event content to them. And there is a lot of event content - there were 130 sessions and seminars at EUWRC, each featuring multiple interventions from people across Europe. How to get it out there?

Original link
Of course, you can webstream. The EUWRC produced 39 streams, with at least some transmitting the raw feed (slides plus speaker) of multiple sessions. The EC doesn't publish stats so I have no idea how many times anyone watched Spatial Data Requirements for Effective Spatial Policy and Sustained and Sustainable economic growth: Balancing economic and ecological development in cities and regions  (right) through to the end.

Sending in professional camera crews tends to result in the opposite end of the spectrum: the brochureware video. These can make your event look good, but don't actually provide much information and generally lack immediacy - although, to be fair, the EUWRC 'after video' appeared one day after the event:

"The European Week of Regions and Cities 2016 proved this year again successful", which doesn't sound like a Soviet-era video relic at all.

Sending in an army of students or bloggers with Osmos, however, could give an event its own cut-price TV station, with both real-time, interactive video events and almost real-time reports from the floor. Immediate, authentic and content-rich, these would sit somewhere between boring-but-informative webstreams and glossy, non-informative brochureware videos.

Their promise: to show the event through the videographers' eyes as they discover it, in much the same way as Clarissa - another #EUinmyRegion winner - does in her first post-EUWRC post.

Balanced against that, of course, is the risk of real-time screwups. But authenticity always come with an element of risk. The real risk is to waste time and money on communication products that are destined to fail.

* PS. Disclaimer: Both EC and CoR are or have been clients, but neither influenced this post.