Let’s take a break from the Donald, Facebook and the end of democracy, and try to focus on what’s important.

Seriously, if you worry too much about the future anxiety will kill you before you see it.

I recently re-curated my reading list (more below), so today’s Top3ics are about what I found which wasn’t about Donald Trump, Facebook algorithms, filter bubbles, augmented realities, the death of newsmedia-and-hence-democracy or the rise of the post-truth populist mobocracies.

Because I have done all that to death already, and as a result feel a pressing need to take better care of my mind.

“the root of our human frustration and daily anxiety is our tendency to live for the future, which is an abstraction… The working inhabitants of a modern city live inside a machine to be batted around by its wheels ”

No, that wasn’t written by one of today’s bearded mindfulness gurus - it was  British philosopher and writer Alan Watts in 1951, discovered via the always-wonderful Brainpickings: An Antidote to the Age of Anxiety: Alan Watts on Happiness and How to Live with Presence.

Watts wrote about presence, and that our inability to live in the moment - to always focus on the future, a purely theoretical place we will never see - keeps us from happiness. Brainpickings’ piece is an excellent read, and Watts’ original book is destined for my Christmas stocking.

Presence, of course, is rooted in Eastern notions of mindfulness - a concept recently reinvented in the West in a form which probably would have horrified Watts. Like all Western imports from Easter philosophy, mindifulness attracts devotees and sceptics in equal measure, so here are:

Two sceptics, pointing out that it’s essentially a personal copout, peddled by those responsible for the disease…

“Fascism’s rising while the global economy’s stagnating… And we’re…meditating?…  mindfulness is capitalism’s latest greatest product… a drug to pacify the broken soldiers on its front lines ”
- The Myth of Mindfulness

… and two fans, who point out that it nevertheless helps people with one of today’s real problems

“If you spend a lot of your everyday moments and time in the future or the past or you have difficulty focusing … maybe you want to learn to live more in the present moment.”
- How to Stay in the Present Moment in Everyday Life: 5 Simple Habits

“the majority of participants reported that they found it unpleasant to be alone in a room with their thoughts for just 6 to 15 minutes…. in one experiment, 64 percent of men and 15 percent of women began self-administering electric shocks”
-  No Time to Think

I’ve been reading about the impact of social media on human psychology & society for at least 5 years, but while To Understand Facebook, Study Capgras Syndrome touches on social media, it’s not about fake news, narcissism or filter bubbles.

This article is absolutely fascinating on a scientific level, but offers even more in terms of living your life well.

Capgras Syndrome is “the belief that loved ones have been replaced by identical imposters”. It happens when two brain modules - one for analyzing the cognitive aspects of recognition, the other for feeling the emotional aspects of familiarity - are not integrated.

It thus illustrates the complete idiocy of the idea that there is a dichotomy between cognition and emotion: “The two endlessly interact… normal function requires extensive integration of the two”. Moreover:

“these functional fault lines in the social brain… have given rise to the contemporary Facebook generation… where nothing is quite recognizable but everything seems familiar… modern life has increasingly dissociated recognition and familiarity, but it has impoverished the latter … We reduce our social connections to mere threads so that we can maintain as many as possible… [and] become increasingly vulnerable to imposters… It’s not that loved ones and friends are mistaken for simulations, but that simulations are mistaken for them.

More: for explanations of recent events and some hints of what the future holds, try some other recent additions to my resources tagged psychology:

“ Man differs from other animals… he has some desires which are… infinite, can never be fully gratified… Russell points to four such infinite desires — acquisitiveness, rivalry, vanity, and love of power… ”
- The Four Desires Driving All Human Behavior: Bertrand Russell’s Magnificent Nobel Prize Acceptance Speech

“Power… gives us confidence to indulge in our base urges… is only likely to magnify the negative characteristics in a man like Trump”
-   Science finds power magnifies personality. It could magnify Trump’s

“how a leader has to operate: forget about the strike-back mentality, and forge a future of warmth and partnership… He asks only, how shall I produce cooperation and friendship“
- Beyond anger

“those with a high I.Q. were, if anything, more prone to the conjunction fallacy… rationality, unlike intelligence, can be improved through training”
- The Difference Between Rationality and Intelligence

Meditation? Psychology? Is Mathew on Xanax?

Two editions in two weeks, after a six month break? What’s going on?

It was a wonderful post by Andrew Sullivan in NY Magazine that made me realise I had some Internet addiction issues, leading me to tweak “Managing the Firehose”, my personal productivity system:

If Managing the Firehose works, how come I was still reading my phone in bed, obsessively opening, Scanning and Queuing the next link, and the next one, and the next one? What happened to getting a life In Real Life, and spending it with the people I love?
- Stop drowning in your Inbox

The tweak included better aligning the process with my personal content strategy (including this enewsletter): 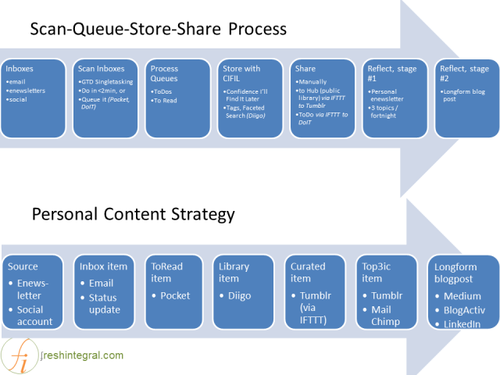 That’s why I’ve managed to put out a second edition in two weeks. But the main change was to take conscious control of my Inboxes - the Sources of content I was Scanning, Queuing, Storing & Sharing:

When I first set up my process, I simply started with the Sources I was following at the time. And then I gradually added to the list… as I shoved more and more content down the mouth of my funnel, less and less came out the other end… I’d forgotten the fundamental Firehose fact: there’s always more of it.

Hence this edition’s focus results from me:

choosing my Sources with deliberation… I highlighted Nautilus and Brainpickings to get more science and philosophy into my reading, at the expense of media innovation…

Because cultivating what you read, study, write and share is a good way of cultivating your mind… as long as you take control of the process, rather than leaving it to Mark Zuckerberg’s algorithm.

I hope you found that what I found was interesting. If so, let your friends know.