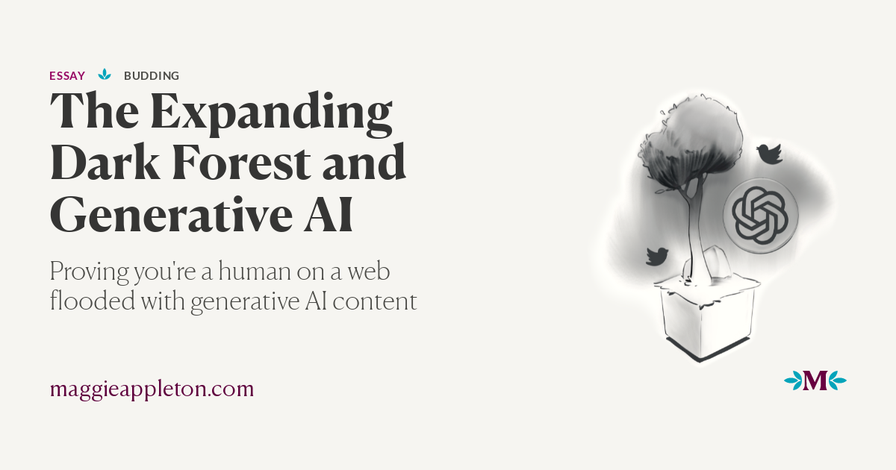 , TikTok clips, podcasts, slide decks, and Instagram stories ... generated by patchworking together ML systems... a sea of pedestrian takes... An explosion of noise that will drown out any signal. "

We'll have to prove we're human

Appleton then looks at the implications, something that's being teasing me ever since this conversation on Twitter: we'll all have to "prove we aren't language models. It's the reverse turing test... Every time you find a new favourite blog or Twitter account ... you'll have to ask: Is this really a whole human ... [moreover] How would you prove you're not a language model generating predictive text?"

How indeed? I've written somewhere that the content we're each read and written is as unique to each of us as our DNA. I feel that perhaps more strongly than most because my "intellectual DNA" - everything I've read, annotated, liked and written - is explicit: it's published on my Hub, all tagged and searchable. Moreover, everything I write is based on that foundation. And, when published, then reinforces that foundation further. So my position has been for some years now that my content strategy helps me come up with content that reflects my unique personal reading and writing journey, and so is unlikely to be something that could be mistaken for a "me too" content creator churning out drek for a content farm.

The latest LLMs shake that idea in several ways. Obviously, ChatGPT cannot come up with something which is both plausibly human and genuinely interesting... yet. But it's likely to happen sooner than later.

Moreover, one of my next blog posts explicitly addresses how I would love to integrate LLMs into MyHub.ai, and the ecosystem I want it to be a part of:

what if you could access an AI with ChatGPT’s language abilities which provided quotes and citations to back up its response? Moreover, what if it favoured, when choosing quotes and citations, your own notes in your Library, followed by the content shared with you by your trusted Friends, then content published by your Priority Sources, and then content published by publishers you’ve annotated to your Library frequently?
- How Artificial Intelligence will finance Collective Intelligence

But that comes with major risks:

What remains to make us human, and AIs dumb?

As Appleton asks: "What special human tricks can you do that a language model can't?"

This is a question that's been asked before. Someone once wryly observed that as AI advances, it is regularly redefined to include things it cannot yet do, so we never actually have artificial intelligence... it's always tomorrow. In the past, we'd have said that what ChatGPT can do is intelligent - it quite literally passes the Turing test. But we rewrite our definition of AI to ensure that

(a) our software is not intelligent

(b) there remains something that we can do that machines cannot.

Hence: "language models ,,, cannot (yet) reason like a human. They do not have beliefs based on evidence, claims, and principles. They cannot consult external sources and run experiments against objective reality".

True, but as we constantly redefine AI, we redefine what it is that makes us human - the abilities we have that machines don't. And as AIs expand, that set of abilities that make us human shrinks. We've seen this play out recently:

So, how to prove you're a human?

(2022)", Appleton finds "some low-hanging fruit for humanness...: tell richly detailed stories grounded in our specific contexts and culture... Reference obscure ... and recent events [LLMs don't know about anything after a certain date] [to] make you plausibly more human".

But how long will those techniques work? LLMs will just keep getting better, and be more up to date, in months. "This feels eerily like a hostage holding up yesterday's newspaper to prove they are actively in danger. Perhaps a premonition."

The best way is to be original: "demonstrate critical and sophisticated thinking... coming up with unquestionably original thoughts and theories... seeing and synthesising patterns across a broad range of sources... As both consumers of content and creators of it, we'll have to foster a greater sense of critical thinking and scepticism".

In other words, we're in an Arms Race: to prove we're human, we're going to have to up our game.

Another trick: use lingo, not language. LLMs automate "La langue ... a standardised way of writing", but that leaves us "La parole ... speech of everyday life... No language model will be able to keep up" as it evolves so fast. So "neologisms, jargon, euphemistic emoji, unusual phrases, ingroup dialects, and memes-of-the-moment will help signal your humanity. Not unlike teenagers using language to subvert their elders, or oppressed communities developing dialects ..."

Aside: the AI are the elders and oppressors in those metaphors.

There's also "institutional verification... show up in person ... get some kind of special badge ... legitimising you as a Real Human".

And turn up IRL.

The above notes were curated from the full post maggieappleton.com/ai-dark-forest?utm_source=pocket_reader.