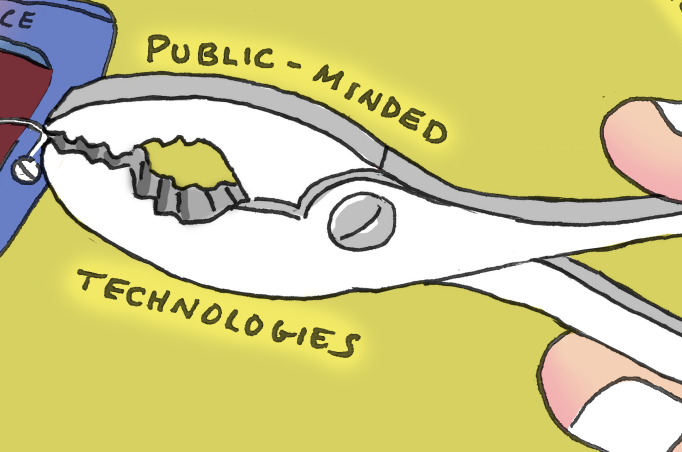 Today's social platforms' business models are not inevitable, but because we see them as such we constrain "the solution space we consider for combatting mis-/disinformation, polarization, and promotion of extremism... we need to consider what technologies [and] digital media to have a productive role in democratic societies".

Hence this essay, which aims "to imagine possible futures where surveillant advertising delivered by monopoly providers isn’t the only available option to build a thriving future of democratic communications", and demonstrates how diverse the introduction of the same technology can be in different political and economic contexts by comparing the introduction of radio in the US, USSR & UK.

The United States saw free market capitalism - experimentation followed by consolidation. Soviet Union was all about state control - one-channel radios connected to the Party. In the UK, the Post Office "charged the BBC with the responsibility of creating content for the nation". The monopoly defined "a social mission ... to be the British citizen's "guide, philosopher, and friend," seeking to “inform, educate and entertain”". Most European countries copied.

BBC had independence - without it, UK could have followed USSR example. This "transformed UK politics and put the BBC at the center of the nation’s political dialogues".

Hilda Matheson, the BBC’s first Director of Talks, sounds like she deserves her own Netflix series: "launched BBC reporting, invented the modern interview format... broadcasting the first live political debate... avowedly liberal, sympathetic to socialism and to the League of Nations, vocal about women’s rights and widely known to be a lesbian... serving with MI5 during the First World War, director of the Joint Broadcasting Committee during the Second World War, countering German propaganda with pro-British propaganda".

Onto the internet: driven by US companies, the Western world started with a media-derived advertising model, evolving into surveillance capitalism dominated by a few companies.

In China, protected from the Western internet and censored, "Chinese netizens ... developed complex visual vocabularies to talk about forbidden topics... to carve out freedom of expression". There's significant tech innovation here: Facebook launching a global digital currency is "best understood as Facebook trying to catch up to Tencent". Result: China’s "hypercapitalist concentration of monopoly power and wealth surpassing the wildest dreams of American monopolists and the darkest nightmares of privacy advocates".

Contrast: wikipedia, driven by donated money and time, "the sole noncommercial site in the worldwide top 100 sites". But the model has not transferred. But it begs the question: "what other services we could build if we innovated outside the logic of markets more often"?

Back to the 1960s, when the US created public service media: "PBS and NPR acted more as complementary media, filling holes in existing programming... [initially] addressing a market failure in providing educational programming", and more recently "the disappearance of trusted news brands". Local public TV, NPR & PBS are now the most trusted media, and provide some communities' only local news.

Combine the UK and US models "to imagine public service digital media: the ambition and comprehensive vision of the early BBC and the ability to complement commercial media exemplified by PBS and NPR."

Idea: tax surveillance capitalism advertising to create $1-2bn annual fund to support public service digital media. But to do what? The article sets out some principles, concluding with helping "create an ecosystem of alternative social networks, designed for use by a wide range of communities for conversation, deliberation, and mobilization... Collectively... bring to light approaches to rules, norms, technological affordances, and moderation strategies that are more tolerant and equitable, which could lead to more widespread adoption... [towards] true integration of online and offline civic processes".

First steps will involve legislation - social data portability and interoperability, allowing ActivePub-style cross-platform interactivity - but we must not just "play defense" by limiting the platforms through legislation "without offering an affirmative vision... experimentation around what might be possible with purpose-built social networks". A lot of research is needed.

The above notes were curated from the full post knightcolumbia.org/content/the-case-for-digital-public-infrastructure.