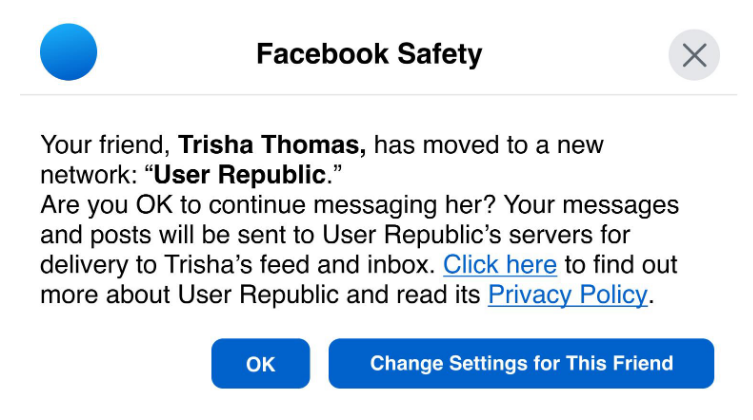 Those who've read Doctorow's books and blogs on the collective action problem stopping people leave the established social media walled gardens may not find anything new, except for the quite brilliant link he makes with "the 1971 film adaptation of Fiddler on the Roof ... the Anatevkans can’t just pack up and leave: they are being held hostage…by each other... They love each other. They need each other. And despite that, when it’s finally time to go, they can’t all agree on where to go next."

Hence the advantage of the Fediverse: "You don’t have to convince your friends to join the same server as you... so long as your friends choose servers that your server connects to... . And if the people who run your server make life intolerable ... you can switch to another server and your messages and links to your friends will follow you there." (although I think only the friends, not the messages, follow - tbc).

Of course, you still can't "talk to ... the people they leave behind on ... Facebook and Twitter", hence the need to legislate interoperability:

"There’s no technical reason that Big Tech can’t directly connect to the Fediverse. The ACCESS Act, a proposed US law, would do just that... [EU's] Digital Markets Act (DMA), which promises to impose interoperability on giant social media platforms…eventually... But ... ACCESS Act will probably die without coming up for a vote. And the EU has decided that the DMA’s first target will be end-to-end encrypted messaging..."

The above notes were curated from the full post doctorow.medium.com/how-to-leave-dying-social-media-platforms-9fc550fe5abf.