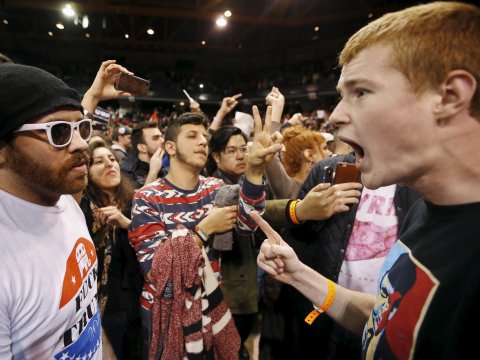 Fighting people with facts only makes them cling to their beliefs more strongly, further polarising our damaged societies. Different tactics are needed, and they start closer to home than you think.

I probably wasn't the only person working in EU communications who thought that Euroscepticism could be beaten by reasoned argument. Like many, I suffered from Projection Bias (the cognitive bias when you believe everyone thinks like you do) so, trained in physics, I assumed everyone saw changing one's mind to reflect the evidence was a badge of honour, not stupidity, treachery or cowardice.

Up until ten years ago I therefore advocated a debunking strategy against Euroscepticism, sure that simply showing people sound, well explained evidence of EU Added Value would bring them 'to their senses' (and yes I know how patronising this 'information deficit' model sounds). The strategy consisted of creating fact-checking content on EUROPA, plus online community management and outreach to get that content into the argument online, in those days the blogosphere.

In 2007, however, I met - and argued with - my first batch of eurosceptic trolls. Not the mild, garden-variety Brexiteers making up 52% of the British public, but the truly enraged, frothing-at-the-mouth, pre-UKIP Pyjama People who ran sites like EUReferendum.org and Midnight Sun, where I met Aurora (my emphasis):

you and everything you’re doing disgusts me. It reminds me of having a pro-Hitler forum … I despise everything the EU stands for and nothing will convince me otherwise - Happy Birthday, Blogactiv! (Oct 2008)

I still think debunking content is important because (as I argued in 2008) there'll always be bystanders in a debate who might still be 'open to reason'. But clearly Aurora was not, so I've been trying to understand mindsets like hers ever since. Most recently, as I researched fake news, I realised that debunking done wrong makes things worse, due to a cognitive bias called the BackFire Effect, triggered when you are confronted with evidence challenging your cherished belief(s):

"dealing with the cognitive dissonance produced by conflicting evidence, we actually end up building new memories and new neural connections that further strengthen our original convictions" - The Backfire Effect: The Psychology of Why We Have a Hard Time Changing Our Minds (Brainpickings)

There's a rich seam of research into this, going back decades. You'll find plenty of links in my latest newsletter, which I wrote as I researched this post (and to keep it short).

The backfire effect means that ranting at the 'other side' - whether it be about Brexit, or populism or whatever - might make you and your tribe feel better, but will only make things worse by further polarising society.

If we continue on our present course, politics across Europe risks dividing along pro- and anti-EU lines, making the EU's existence an election issue somewhere in Europe every year. The above quote, by the way, is from the author of the You Are Not So Smart (YANSS) book and podcast, who devoted three episodes to the BackFire effect, inspiring this brilliant Oatmeal cartoon and prompting my less brilliant newsletter. The 2h40mins of podcast gives you the full picture. If you want the executive summary, try the cartoon. My newsletter is somewhere in the middle. There's a critically important word in the above McRaney quote. Did you spot the same one as me? To find out, choose a word, and then hold your mousebutton down and drag your cursor from here  {it's both, as in "both of you " }  to here to reveal my choice.

If you think you're immune, you're a sufferer

You probably held, as I did, the cherished belief that you are a rational being. The above research calls that into question. You resisted, for all the reasons spelt out in detail at the above links. So, rule 1: know that you are as vulnerable to this as everyone else. It's OK to be human.

But is that it? Are we doomed? A lot of what I read about the backfire effect ends with the author declaring "there's nothing that can be done barring everyone reading my article / scientific paper / cartoon, and changing their behaviour individually". Makes sense - after all, you can't convince anyone of this, because ... of the backfire effect! But as the podcast's first episode points out, the backfire effect cannot be the whole story. If noone ever updated their worldview in the light of new evidence, we'd not have gotten very far as a species.

Answers to this contradiction began to be quantified seven years ago, when psychologists:

"... created a mock presidential election in which people would gradually learn more and more terrible things about their preferred virtual candidates from a virtual news media" - episode 3: How to fight back against the backfire effect (YANSS)

2016 must have given them a bad case of déjà vu. Four important points about this experiment: What they found: the backfire effect 'kicked in' when the subjects started seeing 14% negative news in their newsfeed ... but it was overwhelmed when this figure reached 30%. The scientists termed this the 'affective tipping point', concluding:

"voters are not immune to disconfirming information after all, even when initially acting as motivated reasoners*" - The Affective Tipping Point: Do Motivated Reasoners Ever "Get It"? (Political Psychology)

Bad news: most will never reach it

Remember, when these news consumers were seeing 14-30% negative content about their preferred candidate, their defence of him/her actually increased, due to the backfire effect. It was only past the tipping point that they began recalibrating their views.

The bad news: filter bubbles may prevent anyone seeing that much negative material about their cherished political or social beliefs. My above experience with the Eurosceptics in 2007 meant I was particularly open to the idea of filter bubbles when Eli Pariser published his eponymous book in May 2011 (see What “The Filter Bubble” means for the Brussels Bubble), but despite the thousands of articles published since then, their existence is still contested, most recently via extensive data analyses. Most of the almost 100 resources I've read and tagged filter bubble on my Hub, however, disagree. If they're right, our best efforts to 'get the truth out there' are more likely to trigger people's backfire effect than overwhelm it.

Reach for the handbook. And the Vaccine?

What should communicators actually do with these insights from psychology? Not for the first time (2012, 2010), my hunch was to turn to the science communication community, who have been tackling this for longer than most. Interestingly, some of the scientists interviewed in the second podcast had a similar idea, studying the effectiveness of the US Centre for Disease Control’s highly professional and wholly unsuccessful efforts to convince people that vaccines are safe.

“when they confronted anti-vaxxers with a variety of facts aimed at debunking myths concerning a connection between the childhood MMR vaccine and autism… they were successful at softening those subjects’ beliefs in those misconceptions, yet those same people later reported that they were even less likely to vaccinate their children than subjects who received no debunking information at all. The corrections backfired.” -  episode 2: How motivated skepticism strengthens incorrect beliefs (YANSS)

Are EU communicators in the Brussels Bubble a source of Euroscepticism, rather than a corrective? Ouch. These sorts of results led another team of cognitive psychologists to release the Debunking Handbook in 2011, originally to deal with climate denial. Highly recommended.

Looking at the EC's current content strategy, I see no evidence of any of these techniques, despite asking one or two EC spokespeople for links to debunking content. Feel free to correct me in the comments.

In the final analysis

What I continue to see throughout Brussels, on the other hand, is the same patronising "they're so stupid" attitude I myself held, well after my 2007 brush with the Eurosceptic trolls. Maybe Brexiteers, National Front voters, climate deniers, anti-Vaxxers and anyone else you don't agree with are stupid. Or maybe they're ill-informed or misinformed, which means you're still thinking with the 'information deficit' paradigm (hint: it don't work).

Or maybe they're not. It doesn't matter. What matters is that they're people, like you. Your fellow citizens. The Backfire Effect means that considering them stupid, racist, ill-informed or all three will not help you, it won't help them, and it won't heal Europe.

If you're looking for ways to convince everyone else of the errors of their stupid ways, studying the Debunking Handbook will help. However, it's only half the solution. You still need to get that content out there, because another cognitive bias (confirmation bias) will ensure they won't see it otherwise. And that means engaging with people via the 'online community management and outreach' tactics I mentioned earlier. And out there every argument you have will not just trigger the backfire effect in the other guy.

The other half of the solution, in other words, is in your head. You need to understand your own cognitive biases before you start tackling everyone else's.

You need to understand your own cognitive biases before you start tackling everyone else's.

So next time you get into an argument, try something different. Don't argue. Close your mouth, open your ears, remind yourself that it is not possible that you are 100% right and they are 100% wrong on everything, and really listen to their views. Who knows, you might actually learn something. And at the very least, you might avoid making things worse.

(* note: motivated reasoning encompasses the backfire effect, confirmation bias and other cognitive biases which cause people to "form and cling to false beliefs" - Wikipedia).