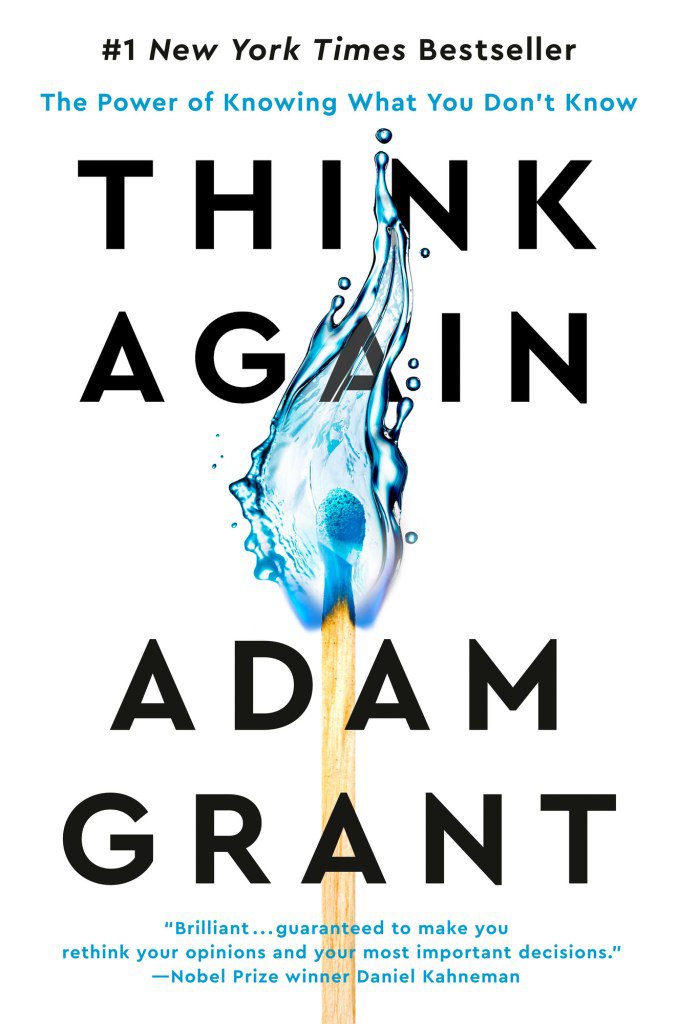 A YANSS interview with Adam Grant, author of Think Again: The Power of Knowing What you Don’t Know. Generally an "extensive exploration of how to rethink your own thinking", including his WorkLife podcast interview of Margaret Atwood on procrastination.

(When annotating a podcast I really like a transcript, but there was none for this episode so I uploaded it to two speech-to-text engines as part of a larger experiment. Blog to follow soon.)

Most people think "procrastination is laziness ... struggling with time management [or] motivation ... it's actually ... an emotion regulation problem". The task in front of you triggers unpleasant emotions - boredom, fear, confusion, frustration - so you put it off rather than confront them.

Step 1: figure out what they are. Margaret Atwood procrastinated the Handmaid's Tale for 3 years because of fear that it was "batty". Her solutions include:

In a (unethical) study, students prepared for a debate only to be destroyed by an opposition spectacularly better informed and prepared. And then they had to watch a film of them squirming and flailing. Many "said it was devastating ... one of the participants ... became the Unabomber".

"But some ... enjoyed the challenge of dismantling their worldviews and try to figure out which of their values were valid and which [weren't] ... I thought what can we learn from those people and how could we build a culture where that is the norm"?

We can all be open or closed. It depends if our "strongly held or weakly held beliefs are being challenged... anger [is] a signal that something that matters deeply to you as is under threat". Blood flows in the brain are different: if you're core beliefs are under attack, the blood flow looks like someone being attached by a bear.

So why react like that when discussing policy issues? "it's not like we're talking about my face... these things are outside of me but they've somehow been grafted onto my identity... embedded within me". How?

Anchor your identity on values, not beliefs

One really good belief about yourself to have is: "you are a person who values The Pursuit Of Truth ... a lifelong learner ... a curious human being ... that allows you to keep growing and evolving [instead of] trapping myself in a cognitive prison of my own making".

Phil Tetlock: People tend to adopt one of three mental models, depending on the circumstance:

Most online comments fall into one of these modes and it rarely ends well - the commenter has already decided they're right, and you're wrong.

[[idea]] a "3P" labelling system linking back to an explanation?

A fourth mode is better: think like a scientist:

That's how you get closer to the truth."

When someone attacks you: "you seem to be very invested in preaching your view and prosecuting mine. What evidence would change your mind?... Now I can ... at least try to persuade on his terms".

"Great minds do not think alike. They challenge each other to think differently... [without] task conflict in a relationship ... you can't learn from each other."

Raises the question: "how do we create institutions where that's more likely?... make the internet more like that?"

Charla Neff, Berkeley: "if a group has a majority opinion... unearth a devil's advocate... who genuinely disagrees ... surface their opinion:... [it's] good for the group's ultimate decision making accuracy and creativity... divergent opinions stimulate... more thorough processing... widen our field of vision".

To avoid the debate having "a winner and a loser... [make] it to look more like a dance".

"Don't follow people because you agree [but] because you respect the intellectual integrity they bring to their questions... you don't learn by affirming your beliefs". Follow people who are "rigorous in their analyses... look for the best evidence... challenge their own thinking". ie avoid groupthink-driven echo chambers.

"increase your ratio of questions to statements... toggle back and forth between... asserting an opinion and [asking] Do you see any gaps in my logic?... what should I rethink?... communicates openness ... brings openness out in other people."

While the ability to think and learn has always been important, "the ability to rethink and unlearn" might be more important: a metacognitive skill of overriding the "knee jerk reaction to stress ... and uncertainty... the reaction to default to what we already know well".

In a rapdly changing world "your best practices were created for an environment that just does not exist anymore... BlackBerry, Blockbuster Kodak... [were not] victims of digital disruption ...[they were] decent at thinking, but too slow when it came to rethinking".

Moreover. research shows that "the smarter you are:

Why? One possible reason: the more time you spend in education, the more time you've been "affirmed ... for being ... right.... you probably haven't built the muscle around recognising that you're wrong".

"my favourite drawing of the Dunning Kruger effect... when you go from beginner to novice... your confidence climbs faster than your competence... tranded on the summit of Mount stupid... you don't try to improve your skills, because you already think you've climbed the mountain of expertise.

The benefits of imposter syndrome

Truly debilitating imposter syndrome is rare. But "everyday imposter thoughts... 'I wonder if other people are overestimating me. Maybe I'm not qualified?'... are actually beneficial.... you work longer... listen more carefully and treat other people more respectfully".

Moreover, there's a contradiction in imposter syndrome: "if you're not competent, then you can't judge your own competence... if multiple people believe in you, they're more objective than you are... [so] believe in yourself."

Where nurses have "to rotate who gets to be in charge ... the nurses ... most hesitant about assuming that role, tend to be the most effective leaders." A little reluctance means you avoid being overconfident or complacent - cf Plato and Douglas Adams: "the only leader I would want is the one who's not sure they want the job."

Ten years ago, as more people learnt about cognitive biases, the prevailing idea was that humans are irredeemably irrational, stupid, etc. This new book is part of "another wave ... more nuanced, more nourishing... more human ... more heart to it".

The above notes were curated from the full post youarenotsosmart.com/2022/05/01/yanss-231-adam-grants-advice-for-becoming-better-at-thinking-about-your-own-thinking-so-you-can-know-what-you-dont-know/.