There Really Was A Liberal Media Bubble 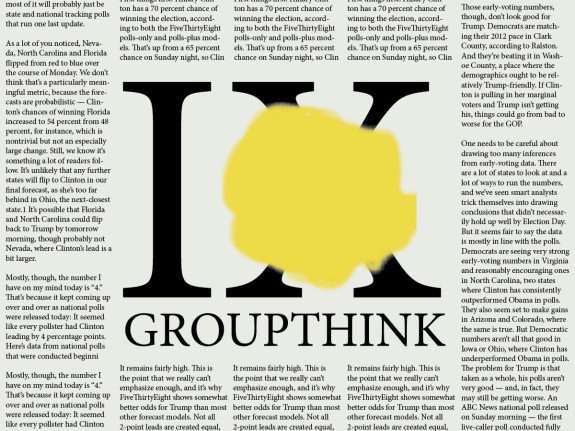 Groupthink produced a failure of the “wisdom of crowds” and an underestimate of Trump’s chances... political experts aren’t a very diverse group and tend to place a lot of faith in the opinions of other experts and other members of the political establishment. Once a consensus view is established, it tends to reinforce itself ... Social media, especially Twitter, can amplify the groupthink further... an echo chamber...
“The Wisdom of Crowds” ... argues that crowds usually make good predictions when they satisfy these four conditions:
Diversity of opinion.
Independence.
Decentralization.
Aggregation....
the digital age hasn’t necessarily democratized the news media. Instead, the most notable difference ...between 2007 and 2017 is the decline of independent blogs... You should be looking toward how much evidence there is for a particular position as opposed to how many people hold that position.

The above notes were curated from the full post fivethirtyeight.com/features/there-really-was-a-liberal-media-bubble/.