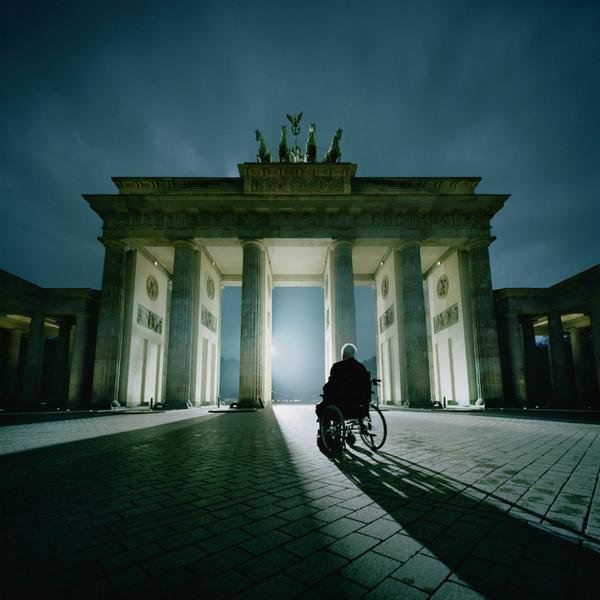 Chancellor Helmut Kohl in front of the Brandenburg Gate, 25 years after the launch a process that led to the reunification of much more than Germany (@bild).

The above photo is incredible. But how will it be viewed in 25 more years?

Of course it's supposed to be a celebration, and it is. But I wouldn't be surprised if, in 25 more years, the spotlight shining down on Mr Kohl is reframed as a setting sun. It will require a little willful ignorance of geography, but willful ignorance seems never to be in short supply in Europe.

Let's face it - there's a real chance that in 25 more years, in 2039, the process of reunification and then enlargement symbolised by this photo will be seen as the high water mark of the European project, until then implemented by a small elite, well over the heads of a European population living in the dark shadow of the Iron Curtain.

But then the Curtain fell. The EU began enlarging to the East - probably the project's greatest success - as it embarked on the Single Currency - possibly it's greatest screwup. In parallel, the world globalised and the Internet came into our homes. By the time Romania and Bulgaria joined the EU, the internet had reached our pockets via our smartphones ... and found the euro already there, burning a hole.

So just as a wider and deeper EU started impacting more and more on our lives, the digital society stimulated people to take a greater interest in how they, and their world, were governed. And as the ECB started removing democratically elected governments, perhaps it is unsurprising that they didn't like what they saw - after all, at the last elections, "around three-quarters of the electorate believed the EU Unimportant OR Harmful AND/OR Undemocratic" (Dialogue of the deaf).

From the perspective of 2039, then, they may rue the fact that the EU remained an elite project for so long, that for decades neither Institution nor Member State brought Europe's population with them on the journey to ever greater Union, never explained what they were up to in Brussels, never showed them how the EU works, or the value it adds to their lives.

But the historians of 2039 may well point out that this was inevitable. The EU, after all, had been formed over those decades by generations of civil servants and politicians who had never had to explain the EU to anyone, who were personally disconnected from the rest of Europe, and only knew people as firmly convinced of the rightness of the cause as they themselves were. Bringing the people with them just wasn't in the DNA, and it wasn't even clear whose job it was.

Of course, this is only one possible future. I sincerely hope, for the sake of my children, that it doesn't come to pass.